April 23, 2020
Stock Performance After Recessions
Is There Light at the End of the Tunnel?

Early economic data illustrates that the U.S. economy is already in recession, and this data point is echoed by market consensus.  There are many predictions as to the “letter shape” of this recession (V-shaped, U-shaped, Checkmark-shaped, and hopefully not L-shaped), and we can’t predict when the most optimal time to buy stocks would be, but history has shown that owning stocks after economic recessions has been rewarding. 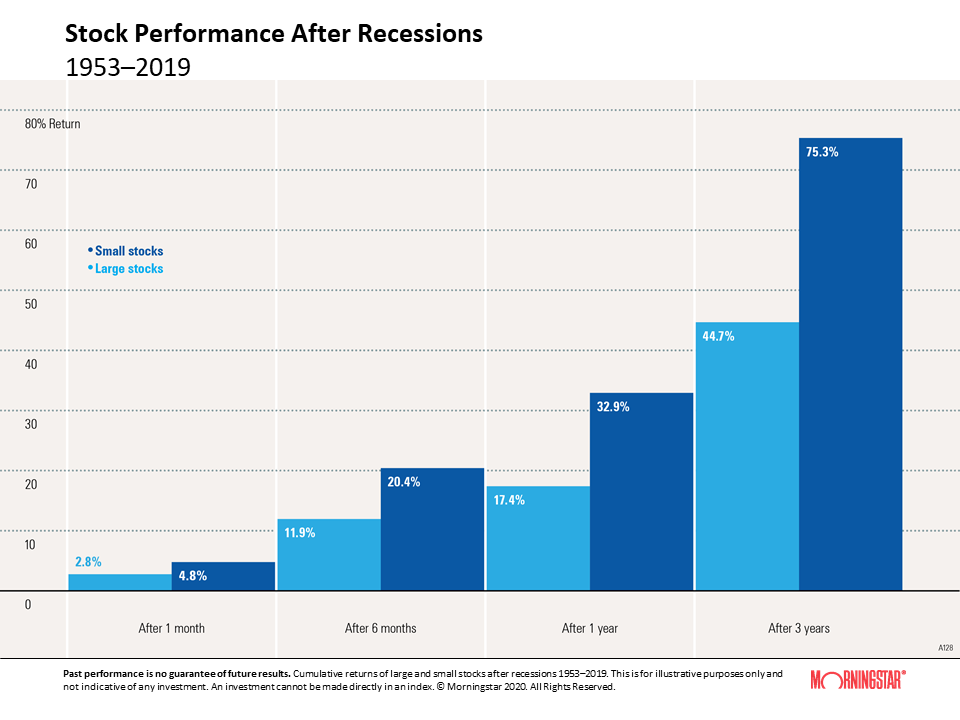 History reveals that small stocks have been among the strongest performers after recessions. Many investors fear the volatility of small stocks. Their fears, however, may not justify overlooking the potential of this asset class. The image shows that, on average, the cumulative returns of small stocks outperformed those of large stocks one month, six months, one year, and three years after the end of a recession. Small stocks haven’t outperformed large stocks after every recession, yet on average their potential to lead the way out of recessions is significant. Diversifying into small stocks may benefit investor portfolios, especially when the market is coming out of a recession.

Diversification does not eliminate the risk of investment losses. Stocks are not guaranteed and have been more volatile than other asset classes. Furthermore, small stocks are more volatile than large stocks and are subject to significant price fluctuations and business risks and are thinly traded.

Recession data is from National Bureau of Economic Research. The average cumulative returns are calculated from the end of each of the 10 recessions in U.S. history since 1953. The National Bureau of Economic Research does not define a recession in terms of two consecutive quarters of decline in real gross domestic product. Rather, a recession is a recurring period of decline in total output, income, employment, and trade, usually lasting from six months to a year and marked by widespread contractions in many sectors of the economy. The data assumes reinvestment of income and does not account for taxes or transaction costs.