March 20, 2020
Stock Market Contractions and Expansions
Endurance Has Paid Off
There have been 8 market contractions and expansions since 1973 with declines over 10%. In this 9th contraction, we don’t know when things will improve, but we can see from the chart that investors that maintained confidence and optimism were rewarded for their patience in the end. 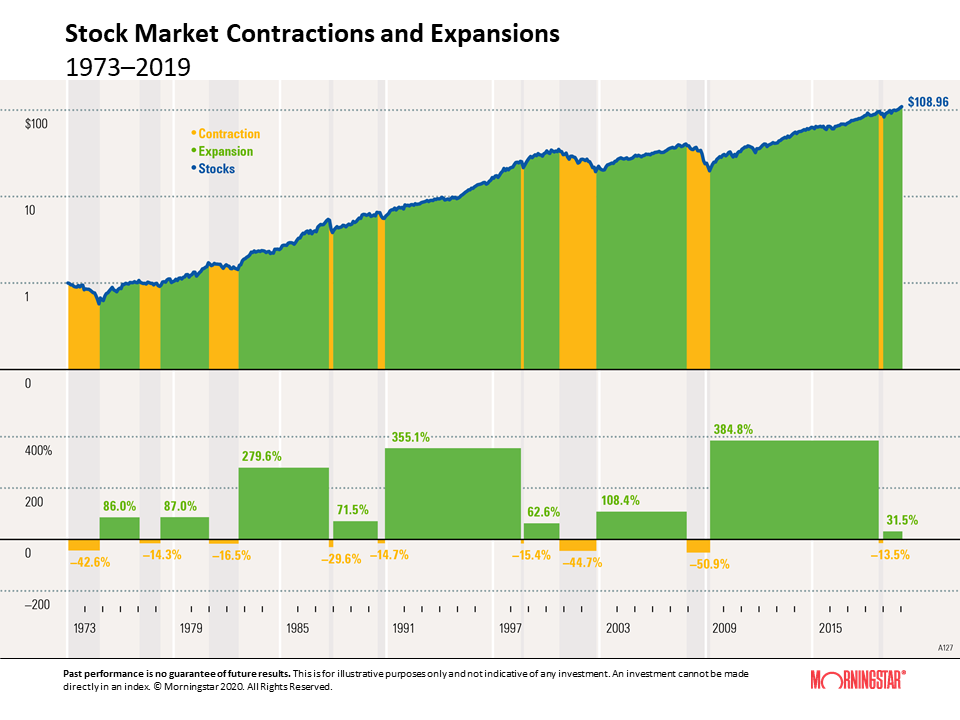 The stock market moves in cycles with periods of contraction followed by periods of expansion. There have been eight market downturns in the past 47 years. The regions shaded in orange highlight a contraction phase of a stock market cycle, and the green regions show an expansion phase. A contraction is defined by a period when the stock market value declined from its peak by 10% or more. These declines seem to happen at random and last for varying time periods. Expansion measures the recovery of the index from the bottom of a contraction to its previous peak and the subsequent performance of the index until it reaches the next peak level before another 10% decline.

The last contraction (associated with trade war with China and rising interest rates) began in October 2018 and ended in December 2018. The stock market recovered from this crisis in April 2019.

While some periods of decline have been severe, the market, overall, has grown with time. For instance, the stock market fell by 14.7% from its peak at month-end May 1990 to its trough in October 1990 but grew by 355.1% from November 1990 to its next peak in June 1998. No one can predict market declines with certainty. Investors should have a long-term investment horizon to allow their investment to grow over time. Returns and principal invested in stocks are not guaranteed.

Large stocks are represented by the Ibbotson® Large Company Stock Index. An investment cannot be made directly in an index. The data assumes reinvestment of all income and does not account for taxes or transaction costs.