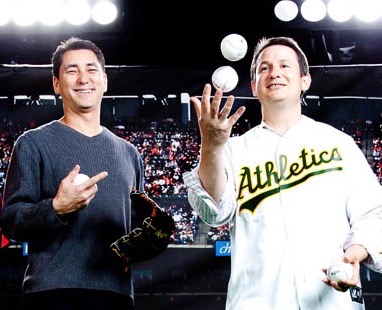 When Marr wrote about the origins of our firm at the start of 2020 (back when we naively thought we were embarking on a ‘normal’ year), he talked about the synergy he had with the original partners of the firm, Ray and Gideon. That bond—which served as the springboard for the firm and still dictates much of how we work, think, and act—was born in part out of the one-of-a-kind friendship between Ray and Gideon that dates back to the mid-90s… and that all began at a job gone wrong.

When it all began, Ray had a dream job, working at the Happiest Place on Earth. As a Disney ‘cast member,’ he served up Polynesian favorites at Disneyland’s Tahitian Terrace. Like many Disney employees past and present, he loved his co-workers, and he was enamored by the whole environment. He admired how precisely every detail was managed, and he was amazed at how things could be in chaos two minutes before an event started, but magically come together the moment the guests arrived and it was ‘lights up’ for the team. But that was just one piece of his life. His other priority was putting himself through school at Cal State Long Beach, where he was earning his degree in finance. Having watched his parents work six days a week—his father running his automotive business, and his mother managing her clothing company in the garment district—he was working toward his own goals… and he was getting closer by the minute.

Gideon was also working hard, earning his degree in psychology at UC Santa Barbara. When Ray was spending his days at Disneyland, Gideon was interning in a research lab that focused on understanding depth perception and developing GPS systems for the blind. Their worlds had nothing in common, but fate would bring them together.

Ray was determined to stay with Disney until he hit the 10-year mark (an important milestone for every long-term cast member), but he also wanted to get his career in finance moving, so he took a part-time position at a local financial firm. A year later, Ray was hired full-time as the portfolio administrator. Just months after that, Gideon also landed at the firm as the new portfolio manager. Gideon had decided to pivot his career by applying the strong research and analytic skills he’d learned in the psych lab to the world of finance. After passing the CFA exam, he landed a job in Orange County and moved his family from Calabasas to Irvine. Ray, the quiet one with the straight across smile, and Gideon, the extrovert who loved to make everyone laugh, hit it off immediately. (“Sometimes opposites really do attract!” says Gideon.) They worked together, laughed together (fueled by a long list of pranks on their co-workers and each other), and even faced tragedy together as they tried to save the life of a colleague who suffered a heart attack at the office. The working environment at the firm was totally dysfunctional (to put it politely), but they both stayed. As Ray says, “We were both too nice to leave, so we leaned on each other to gain the experience we needed to take our next steps—and to get through it all together.”

But by ’99, Ray knew it was time to move on. Luckily, the pieces fell into place for his next move when he interviewed with Marr, who offered him a full-time position. A year later, when the firm was looking to hire a new portfolio manager, Ray put Gideon’s name into the ring. When the firm offered him the job, Gideon was more than happy to accept.

Not long after, in early 2002, Marr decided it was time to open his own firm, this time with a new mission: to put the best interests of the clients first while helping to grow and protect their assets. Marr invited Ray to join as a partner, and Ray immediately recommended bringing on Gideon to form a trio. Though they were working at the same firm, Marr knew Gideon more as a fellow member of the CFA Society where Marr was then president. He knew Gideon’s character—and he knew in his gut that Ray was right: Gideon was the right man for the job. For all three of them, it was time for a fresh start. Even more, they felt they could trust each other completely.

It proved to be a perfect match—again. For the first time in their careers, Ray and Gideon had control over their destinies. And they both believed strongly in Marr’s vision: that the most important thing was to do right by their clients. Making money themselves was secondary. Moving forward, they each had their own roles and played their parts well. Marr, the most experienced of the three, was the ‘rainmaker.’ Ray’s experience in portfolio management and client service, combined with his background at Disney, made him a skillful ‘stage manager’ that kept every detail functioning as it should. For his part, Gideon played the ‘producer,’ constantly creating new opportunities, guiding the investment strategies, and building business plans that gleaned the most from each person’s unique skill sets. Full of big ideas and even bigger ideals, he provided the direction that helped propel the firm to where it is today.

As the business evolved, that cohesion never faltered. Though the firm has grown over the past two decades, there are still no egos to contend with, and no corner office to aspire to. Ray and Gideon are still playing their roles with fervor, and their mission and path ahead remain as clear as ever. As the ‘stage manager,’ Ray still keeps the everyday details in check to keep the business running smoothly. As the consummate ‘producer,’ Gideon continues to guide the firm forward, to do the deep thinking required for portfolio analysis and strategy, and to make everyone laugh whenever possible. It’s an ideal partnership—and a strong foundation to continue to lead the firm into the next generation.

Over the years, the bond between Ray and Gideon has only gotten stronger. When they were younger, their kids were the same age, their wives enjoyed each other, and their summer BBQs and holiday gatherings added meaning to their lives. Today, the kids are older, their wives are wiser, and they spend more time together than most brothers. “Our history and the strength of our relationship has made working together so safe and comfortable,” says Ray. “I feel incredibly lucky that we have total confidence in each other and in everything we do.” Gideon adds, “We always have each others’ backs—and complete trust and loyalty. It’s remarkable to know that is never questioned.”

A little sappy? Perhaps. But 100% sincere. And we can all be sure that, just like brothers, there’s always another great prank waiting just around the corner… and a good laugh to go with it. Some things never change.